This was the nerve centre of The GSSR, with extensive workshops, administration buildings etc covering 3.6 hectares. The workshops, with up to 250 staff, were capable of removing and re-tubing boilers and all major repairs to locomotives. Only the Kitson-Meyers were sent to Bilbao for major works.

Like Swindon, Doncaster, York etc Águilas is a railway town and all of the people one will meet will have had at least one member of the family (there are around 500 families) working on the railway.

Águilas was chosen due to its port as most of the materials for the construction of the railway would have to come by ship. In addition, Edmund Sykes Hett was already thinking of The GSSR carrying iron ore from the Almanzora Valley to ships and El Hornillo was to be perfectly placed for this.

This was a very busy passenger station in Summer as a resort for holidaymakers, as the bays of Águilas are blessed with sandy beaches. Even today, extra trains are put on in the Summer months. In this way, The GSSR brought much wealth to the town in spite of the fact that the tourists brought large amounts of baggage with them containing all of the food that they would need for their holidays.

After El Hornillo opened in 1903, all of the iron ore trains passed through the station, stopping to go through the procedure of splitting the train in half for the Mogul loco to pull the 300 tonnes of ore up the steep slope (1 in 24) to the pier. Even so, the locos would have to take a number of 'run-ups' to get the train up the 11 metres (35 feet) in height to the pier.

Still in use by Renfe with trains to Lorca, Murcia etc. The workshops are in a very poor condition and are in danger of falling down.

The offices for the whole of The GSSR were here on the first floor of the station building, except the workshop office which was right in the centre of the maintenance area. Below was a vaulted storeroom and strong room which is now the Railway Museum. 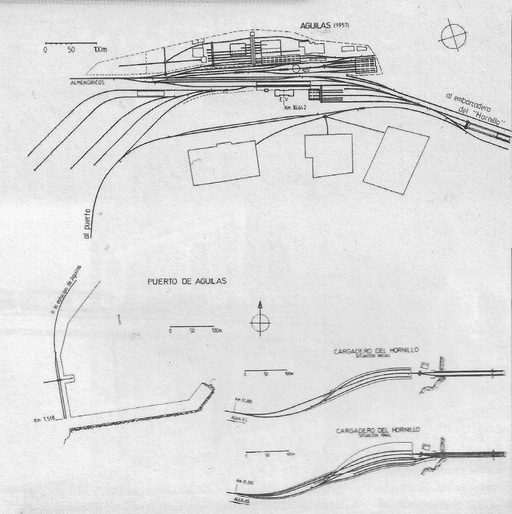